Home » News » Choosing a bike for your child

Choosing a bike for your child

Isla Rowntree started Isla bikes in 2005 and said in a recent interview. “I was drawn to kids’ bikes because what was available just seemed so poor. We all know how much difference a light, well-fitting, well-adjusted bike makes to our enjoyment of cycling, so why were we putting our kids on such heavy and difficult-to-use bikes? That was where I started, simply wanting to improve kids’ experience of cycling in the hope more of them would enjoy it and want to do it again and again. As a small adult I think I brought some user insight to what it’s like trying to ride with parts that don’t fit, and was able to apply that right down to tiny people!”

Since then many other manufacturers have followed Isla Bikes lead to drastically improve kids bikes and move away from the heavy hard to use bikes made in the Far East with gears that don’t work properly, brakes that are too stiff or out of reach or even forks that have been put on the wrong way round.

Bikes need to fit correctly, work correctly and not be too heavy! And ideally they need to be flexible so they can be used for a triathlon, a duathlon,  a circuit race, a cyclocross race or for just getting out and about.

Ridgeback Bikes,  Frog Bikes, Squish Bikes and Isla Bikes, are examples of quality bikes designed for kids. They are lightweight making them easy to handle, proportioned perfectly for children and great quality so they are built to last. A mountain bike or a cyclo-cross bike (like a road racing bike with slightly knobbly tyres that can be changed over to slick tyres) are both good choices.

Isla Bikes are sold online but for the other brands we strongly recommend visiting your local bike shop for advice on fitting & size. 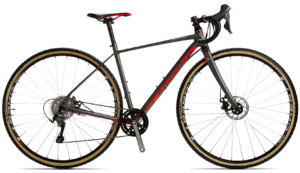 Although you will pay a bit more for a good quality bike, there is a big demand for them second hand after your child no longer needs it, and more importantly you have the reassurance of knowing that they are riding something safe. If you can’t stretch to a new bike have a look on Ebay or Facebook groups for quality second hand kids bikes.

Basic bike shoes are just stiffer versions of normal shoes. But most people who compete in cycling whether it’s triathlon, road or mountain biking use so called ‘clipless pedals’ that allow the shoe to clip to the pedal. A cleat is bolted to the bottom of special Cycling Shoes which then clip into the pedals. For young riders the 2 bolt off-road clipless pedal systems, such as Shimano SPD are best. They are easier to clip in and out of & also the shoes can easily be walked in. Clipless pedals are not recommended for under 8s. And in practice only a minority of children  in the Tristar Start, Tristar 1 & Tristar 2 categories (ages 8-12) use them. But for older children who have to cycle longer distances they are well worth considering.

Your local bike shop will be able to advise on helmets and allow your child to try on a few different ones. Be warned there are some fake helmets for sale on places like ebay so it’s best to buy from a reputable retailer.

OUR SPONSORS AND PARTNERS

Sportiva Partners with the Property Press