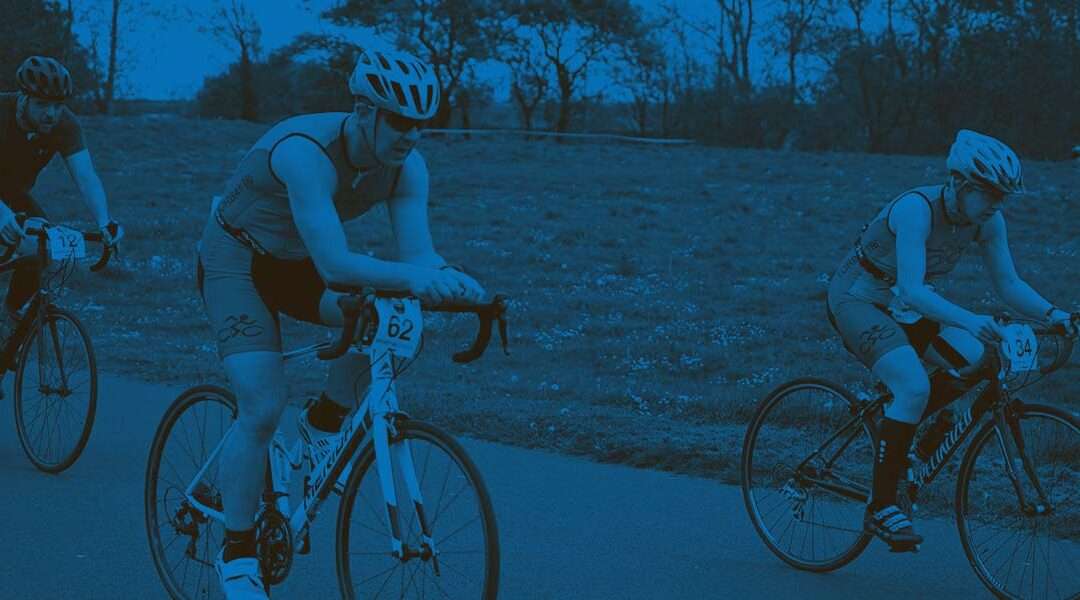 A duathlon is almost always a run, bike, run. Distances can vary but a typical sprint distance duathlon is a 5K run, a 20K bike and a 2.5K run. A standard distance is double those distances. The winning time in a sprint distance duathlon is likely to be around an hour with other finishers taking up to two hours. Duathlons start with a run to spread people out. If they started with a bike race there would just be a big, potentially dangerous bunch of riders.

I was pretty naïve the first time I tried a duathlon. For a start I foolishly decided to start near the front. The first half mile was uphill & I was still near the front at the top of the hill. Unfortunately I’d gone deep into the red and for the rest of the 5K run could only watch as a procession of people passed me. On the bike, my strongest discipline, my legs were dead (as I hadn’t practised riding off straight after a run). At the end of the bike my fingers were too numb to do up my shoe laces. The last kilometre of the second run was OK but unfortunately it took me over a mile to get my legs going after the bike. So for people tackling their first duathlon here are a few tips and maybe a couple of  things to think about even if you’ve done one before.

1. Practise bricks (where you change immediately from running to cycling and back to running). Even if they’re short they will really help your muscles adapt and reduce the time it takes to get up to speed at each transition. They’re also a good excuse to practise transitions.
2. Practise transitions. It’s surprising how much time you can lose in transition & spending a bit of time practising will give you a much better return on time-invested than trying to get a minute off your 5K time!
3. Get some elastic laces. It’s much quicker to get your running shoes on with elastic laces. But equally important most duathlons are between October and April and it’s not uncommon to end the bike leg with slightly numb fingers!
4. Think about clothing for the bike. You can do a running race in a vest & shorts at almost any time of year. But cycling has a much bigger wind chill effect because you’re going much faster (up to 40mph on sections of the Devon Duathlon for instance). That’s why you’ll never see club cyclists out on their club run wearing shorts in the winter. If it’s a cold day you’ll need long-fingered gloves and probably an extra layer on your torso (eg a windproof gilet). If it’s really cold clothing that covers your knees is the way forward. Cycling shorts and a technical tee are fine for a duathlon if you don’t have a Tri Suit. Probably best not to tackle a duathlon longer than sprint distance if you’re just wearing running shorts as they can get uncomfortable on the bike.
5. Pacing is crucial. If you’re doing a sprint event (5K 15K/20K, 2.5K) your run pacing needs to be a lot closer to your half marathon pace than your 5K pace. Think about the total time you expect to be racing for, and gauge your first run pace to that.
6. Check & pack all your kit the night before: bike, spare tube & pump, shoes, helmet, bottle for bike, nutrition, gloves etc. I speak from experience as I have the t-shirts for turning up at a mountain bike race without a helmet and at a cycling road race without any shoes.
7. Recce the course if you have time.  At the Velopark, home of the Donut Duathlon, there are a couple of technical corners. You’ll need a few practise laps before you can nail these at speed and get used to how far you can lean the bike over. Details of both bike and run routes for both our duathlons are on on our website.
8. Arrive in good time to register and have time to rack your bike & go for a warm up. 90 minutes before the race start is a good time to aim for.
9. Don’t get hung up on kit. It’s about the athlete not the bike. However cycling shoes that clip onto your pedals will speed you up. After that a pair of clip-on tri-bars will improve your stream lining and definitely lead to a faster bike leg (provided you’ve practised riding in that position in advance). A dedicated triathlon or time trial bike will be fastest on the Devon Duathlon and the Donut Duathlon courses. And you don’t need duathlon-specific clothing. As mentioned earlier it’s fine to run in cycling shorts.
9. Top duathletes (and triathletes) clip their shoes to their bikes in advance & move out of transition onto their bikes in one seamless movement. You too could do this, but you’ll have to practise. On no account try this if you haven’t or you’ll probably end up in a heap on the ground. For beginners it’s probably best to put your cycling shoes on then run with your bike to the exit. It’s still worth spending some time practising mounting your bike though. Watch this Video for the basic steps to mounting your bike without losing a lot of time. It’s a cyclocross video but applies to duathlon & triathlon too. We see some truly awful bike mount/dismount technique at all the triathlons & duathlons we organise.
Ben Tisdall